The Shifting Connotations of 9/11

Twenty years ago September 11th changed from an unremarkable day to something with as much connotation for Americans as the Fourth of July.

From Fear to Loathing

Where were you on September 11, 2001? is perhaps our generation’s equivalent of what was for Boomers: “Where were you when Kennedy was assassinated?” (i.e. the memory is easily conjured at the question).

I was in Orange County, California on a consulting engagement, having taken American Airlines Flight 11 to get to Los Angeles from Boston just 48 hours prior to its dreadful successor. Whereas my friends back on the East Coast lived through the horror in real time, so much had already happened by the time we had awoken on the West Coast that it was disorienting to take in so much at once. What’s less memorable (because of the daze most of us were likely in) is how work and life ground to a halt that week, and one day blurred into the next as we followed the ‘round-the-clock news cycle to assess the remaining danger and to search for answers that wouldn’t easily present.

Like a lot of stranded travelers it took forever for me to make it back home, and when I did it was via short hops: LAX to St. Louis to Newark to Providence; train the last 50 miles to Boston. (In EWR on that Friday night, I think, there was some apparent threat that snowballed into a panicked evacuation of the terminal — it’s fair to say that collectively people were skittish.) But it was that last flight leg from Newark to Providence where I got a personal aerial view of the terrible smoldering destruction in Lower Manhattan.

After the chaos came America’s grief.

Then the patriotism. Not from the Right, but from everyone. American flags flew everywhere (draped from the sides of buildings, featured on manicured lawns, sported on lapels) — a stark difference from today where (sadly) the typical American flag emoji 🇺🇸-brandished Twitter bio indicates certain political leanings. That patriotism both manifested in and was fed by the celebration of all of the heroes, living out John 15:13: firefighters, police officers, rescue workers, everyday people rising to the occasion…like Welles Crowther1.

And not just patriotism, but an outpouring of love and support from abroad.

But then came the retribution (The War on Terror) that unfortunately ended up squandering the “hope, goodwill, and unity that 9/11 initially created”2 over the subsequent months and years.

The love of my life (Yeobo) was born on September 11th, 19alskdfjahem, and so since our courtship that’s happily replaced the gloom 9/11 otherwise carries.

Then a few years ago our little boy decided he’d make his grand debut on the very same day. He was born 10:35 PDT, but a few minutes later3 Yeobo’s OB transformed from easy-going mother-supporter to infantry commander, ordering me and newborn son to exit, and whisking Yeobo away to the OR to stop a massive postpartum hemorrhage made out-of-control by disseminated intravascular coagulation. If it weren’t for Dr. Lofquist’s quick decision-making (including summoning her longtime interventional radiology specialist buddy Dr. Myron Marx) things could’ve turned pretty awful that day. (At the very least, without Marx et al., it would’ve been hard to avoid a hysterectomy and ergo we wouldn’t be currently preparing to welcome another precious baby into our family.)

It’s a funny thing how things can take on varied (contrasting) meanings; September 11th is that for me, I suppose. Actually, on balance, it’s a blessed one: 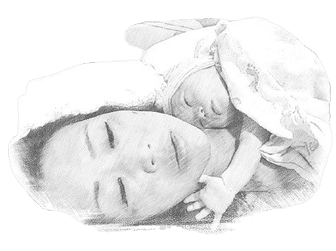